When we were at Kilimanjaro in January 2018, we were helped along the way by Chief’s Tours’ expert team of guides, strongmen (we were told they didn’t like being called porters), and cooks.

Cook is not a sufficient title for the skill and expertise of Mateo.  He was more than a cook.  They didn’t even call him, Chef.  The rest of the Tanzanians referred to him as The Stomach Engineer.

Everything that The Stomach Engineer served us was fantastic and delicious – and that’s not at all easy, when your clients are from another country on the other side of the planet and accustomed to different foods.  To top it off, Mateo engineered us amazing meals even though we were at extreme altitude (altitude suppresses appetite, makes things taste different, and changes the physics of cooking).

Mateo went out of his way to welcome us to Tanzania with a delicious blend of Tanzanian, European, and American cuisines. One of the meals was fried chicken with French fries and another was fried fish with saffron rice – on top of the highest mountain in Africa!

Another thing that was really remarkable about Mateo and our culinary experience on Kilimanjaro, was the vast majority of it was prepared from fresh ingredients.  They recoiled at the idea of serving their paying guests pre-packaged foods.

I saw strongmen carrying buckets of fresh eggs and baskets of fresh vegetables to be used in our meals. If an expedition were scheduled to last longer than the supplies that they could carry, they would schedule strongmen to make resupply runs up the mountain to meet the climbers at a particular campsite.

One of our absolute favorite meals, while we were in Tanzania, was one cold night when Temba (the Table Boy) brought us a steaming cauldron of Mataeo’s fresh leek soup with a plate of bread and butter.

Leek soup is not typical Mississippi fare, though it is not unheard of.  We tried it and loved it!  That leek soup totally outshone the rest of the meal that night.  We craved more of it and swore that we would try to recreate it when we returned home.

What follows is my first, totally inadequate attempt to recreate Mataeo’s leek soup.  As a starting point, I dug up this recipe for creamy leek soup on the internet

How we put it together

First, gather the veggies – 1-2 carrots, an onion, 2-3 vanes of celery, and 1-2 potatoes.  Clean the veggies, peel the potatoes, and dice everything.

Leeks require some special attention.  Apparently, it is impossible to grow leeks without getting dirt and sand trapped between the leaves, so you have to know how to clean the veggie.  First, trim off all the dark green parts of the leaves and discard them, leaving the white and light green parts.

Then slice the white and light green stalk longitudinally.  When you do this it will tend to separate into layers akin to the vanes in celery.  Once the stalk is cut and separated into layers it is easy to wash the dirt and sand out from between the layers with some running water.

When the leeks are cut and cleaned, dice them.  Maybe dice is the wrong word.  You attempt to dice them but the dice fall apart into leaves sort of like dicing a cabbage.  But you get the picture – cut the leeks into bits.

To make the roux, throw the other half stick of butter into a skillet and sprinkle in about a quarter cup of all-purpose flour.  Stir this constantly over medium heat until it turns golden and starts to smell cooked instead of raw.

Immediately take it off the heat and transfer a cup of liquid from the stock pot to the roux.  This will cool it, stop it from cooking, and cause it to congeal into a big sticky glop.  Then you use a whisk to transfer the sticky glop of roux into the boiling soup and whisk it till it dissolves.

At this point, use a blender, food processor, or immersion blender to puree the soup into a cream. 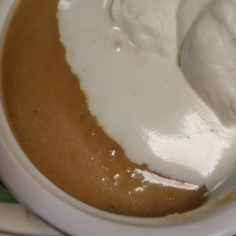 The internet recipe finished the presentation of the soup by adding a daub of whipped heavy cream to the top of the bowl when served.  We tried it that way and it was okay but it didn’t seem to add much oomph to the soup.

I served the soup with some dry Ezekiel toast and a choko slaw with avacado and jalapenos (but that slaw is a story for another day).

What we thought of it

I thought it was okay but not great.  Elise thought it tasted a bit like gravy.  Ellen loved it so much that she said it was good enough to win me a place on the TV reality show, Worst Cooks in America!

It was an okay soup but it was no miracle.  It needed to have a stronger leek flavor and I should have used chicken stock instead of vegetable stock – or else cooked a couple of meaty ham hocks into it.  Served in a bowl with a big chunk of salty ham, this soup would be pretty rocking.

The internet recipe claims that it is better after resting in the fridge for a day or two, and that turned out to be true!  The second day, almost all of the gravy taste was gone and it almost tasted like gumbo.

What to try differently next time

That sounds like basically, a leeky potato soup served over meaty hambones… or maybe a leeky split pea soup over ham hocks…

Tagged as: Kilimanjaro 2018, Story for Another Day