The Year of the Beach

The Roaming Parkers are pretty much evenly divided between mountain people and beach people.  I don’t mind beaches but I vastly prefer mountains, and Elise will tolerate mountains but she loves the beach.  I think the kids are about evenly split too.

It turns out that this miniature civil war stretches back in Elise’s side of the family at least 3 generations with the women favoring beaches and the men favoring mountains. (But that’s a story for another day.)

We got a good dose of mountains when we did Kilimanjaro this past January, so to make up for it, we’ve got several beach trips on the agenda for the next year.

It seems like this is The Year of the Beach for the Roaming Parkers!

In the end of June we’ll be traveling to the Portland area, where we will actually attempt to get a balanced diet of mountains (Mt. St. Helens) and beaches (Cape Disappointment and Long Beach).

We weren’t able to get a permit to attempt to summit Mount Saint Helens (what is left of the summit) so that will leave us with some extra time and energy to hit the beaches and explore the coast!

In September we’ll make a return trip to the Riviera of the South, Gulf Shores Alabama!  September is the best time to visit the sugar-white beaches of Gulf Shores because the rates and crowds drop after Labor Day and it is still warm but not as scalding hot as mid-summer.

Beachcombing, swimming, fishing, mini-golf, zoo, historical coastal defense forts.  You can eat out or go the cheap route and hit the grocery stores and eat at the crib.  You can shop, do yoga, or eat ice cream.  Gulf Shores has it all! 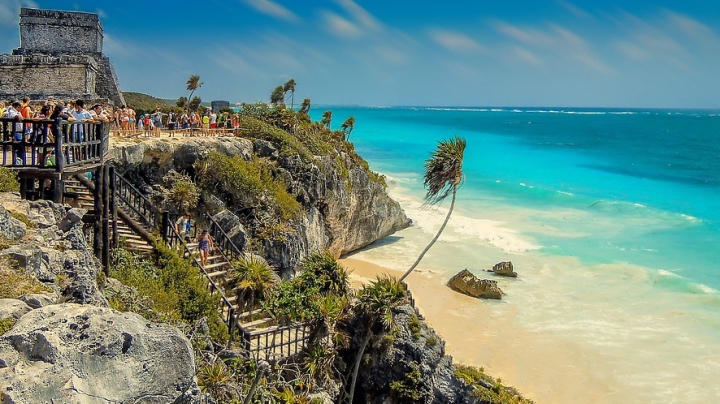 Toward the end of the year, we’ll jet down to Tulum and Coba to check out the Mayan ruins and Caribbean beaches in Quintana Roo Mexico.  Hopefully it will not be as crowded as in the photograph above, but crowds or not – I’m sure Tulum will be amazing (and I’ve been told that Coba is even more spectacular)!

Next Spring – Probably March or May, we’re planning something Mediterranean.  Not sure what, but the Mediterranean has long been on Elise’s bucket list.

After that, we might have had a sufficient dose of beaches for a while – sufficient enough to justify another mountain trip – maybe Table Rock and Linville Gorge in North Carolina or maybe even one of Colorado’s 14ers!

If you are more of a mountain person and want a good book to explain some of the wonderous biological diversity of the beach, check out Rachel Carson’s The Edge of the Sea

(or really any Rachel Carson book).  It turns out that my local Nature muse studied with Rachel Carson way back in the day (But that’s a story for another day).

Or, If you are more of a beach person and can’t figure out what people see in the mountains, maybe this is the book for you – Why We Climb: The World’s Most Inspiring Climbers

If you click on any of the book links, it’ll take you to Amazon, where you can purchase the book and The Roaming Parkers will get a small commission at no extra cost to you.