This tick can make you allergic to red meat!

I read some headlines several months ago about a tick, the bite of which can make people permanently allergic to red meat!  It sounded so implausible that I figured it must be B.S. but it turns out it’s true.

Since I first read about the rare and bizarre alpha-gal allergy that can be caused by the bite of the Lone Star tick, I figured it was a far-away thing – something that was nice to know about but that wouldn’t ever have any direct impact on me.  But just today I discovered that a buddy of mine from University was bitten by one of these buggers and has been alpha-gal allergic for several years now!

Here is his story in his words…

I can’t eat pork, beef, or any other mammalian meat because of ticks!

I’ve had it for about 7 years now. I went for about 18 months un-diagnosed.

For those 18 months I would occasionally wake up in the middle of the night, covered head to toe in hives, even the soles of my feet and palms of my hands would be itching. I would take a couple of Benadryl and symptoms would subside enough for me to go back to sleep. I would feel kind of crappy for the next 24 hours or so. I always assumed that it was a reaction to an insect bite or something of the sort.

I finally had three reactions during a two week period and went to the doctor. My family doctor didn’t know what was going on, so she made an appointment for me with an allergist in Charlottesville.

The allergist listened to my explanation of the last 18 months and before running a single test, told me that I wouldn’t believe him but that I was allergic to ALL non-primate mammalian meat.

The tests confirmed it. Turned out he was good friends with the head of the research team at UVA that had published the first paper describing alpha-gal allergy, otherwise, I probably would have gone another year without a complete diagnosis.

alpha-gal is short for galactose-alpha-1,3-galactose, a type of blood sugar that occurs in all mammals except primates.  If a tick bites a non-human mammal and then bites a human, it can release these alpha-gal sugar molecules into the human’s bloodstream, causing an immune reaction that basically immunizes the person against all future ingestion of meats containing alpha-gal.

For those not familiar with alpha-gal allergy, it is the only known cause of anaphylaxis that is triggered by a carbohydrate rather than a protein. In this case, the alpha-gal complex sugar that is found in all mammals except primates (and thus humans).

A researcher in Australia made the connection to ticks, and further research in the US has tied it fairly concretely to the Lone Star Tick, particularly bites from the early lifecycle states.

The actual reaction occurs 5 – 8 hours after ingestion when the alpha-gal enters the bloodstream from the small intestine. Some people always have a reaction, some are sporadic (like me). Some people also seem to have a dose-dependent version. Because the reaction is to something entering the bloodstream it is a full-body reaction and has been deadly in some people.

Because of the delayed reaction, the fact that meat does not always trigger a reaction, and the unusual nature of the allergen, it was a very difficult allergy to diagnose until knowledge of it became more common.

In the mid-Atlantic, where it is most common, it is estimated that 60% of anaphylaxis of an indeterminate cause is because of alpha-gal.

The best tick repellent out there is permethrin.

If you are going to be in the woods and tall grass in the Southeast United States during tick season (April through November), you should consider wearing long sleeves and pants.

You can spray the permethrin onto your clothes and let it dry and it can repel ticks for weeks. 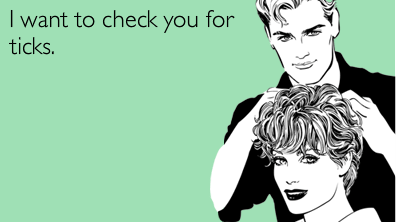