Is that snake poisonous or not?

In the spring the weather begins warming up, trees begin greening, and hikers get the itch to be outside!  But humans are not the only things that start getting out in the woods in the spring.

Snakes begin waking up and stirring around and there are always a lot of snake encounters this time of year.  Hikers are often wondering whether or not a snake is venomous.

In and around Mississippi it’s not too hard to simply memorize all the poisonous snakes and learn to recognize them because there are only six that live in this area.

You can learn them and memorize them, but most folks make do learning a handful of rules of thumb about which snakes to kill or avoid and which ones to simply leave alone.

If it rattles – it is a rattlesnake!

This is an easy rule to remember and it accounts for half of the venomous snakes in Mississippi.  If it rattles then it is venomous.

There are a couple of caveats with this rule, though.  Some rattlers, especially small ones may rattle almost inaudibly, and some non-venomous snakes will shake their tail as either mimicry or an evolutionary throwback.

If it rattles then it is venomous – check!

Our most common venomous snakes are Copperheads and Cottonmouths – both considered to be moccasins (nobody knows why the Indians called these things moccasins, which also means shoe.)

Both of our moccasins (and our rattlers too) have distinctive triangular heads.  None of our non-venomous snakes are triangle-heads. 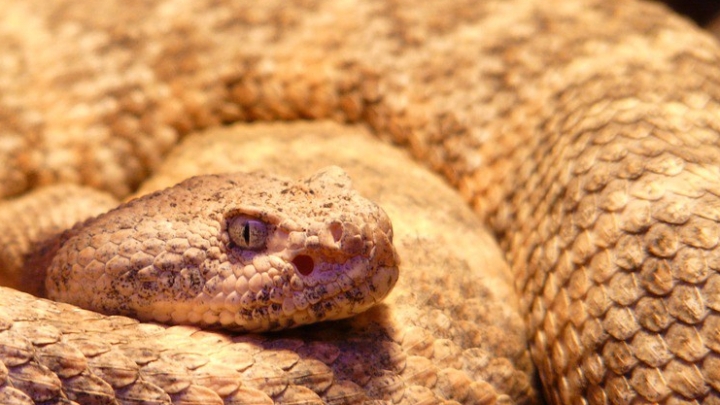 This is another rule of thumb that you can easily use in conjunction with the triangle-head rule to be sure a snake is venomous or not.

Rattlers and moccasins all have slit eyes.  Round-eyes are non-venomous snakes. 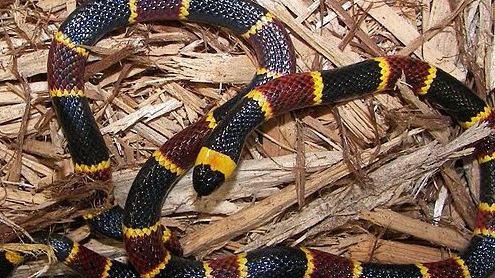 That leaves one dangerous fellow.  Unfortunately, he breaks some of the previous rules.  Fortunately, he is easy to identify anyway.

The Eastern coral snake breaks the rules about triangle-heads and slit-eyes but his tricolor pattern is distinctive.

The problem with identifying any red, black, and yellow snake as a coral snake is there are snakes that attempt to mimic that pattern, so we have the mnemonic device, “red touching yellow, dangerous fellow.  Red touching black, friend of Jack.”

In the venomous Eastern Coral Snake (above), the red bands and the yellow bands are always adjacent., whereas in a non-venomous mimic (like the scarlet kingsnake below) the red and black bands are adjacent.

In summary, you can usually do pretty good identifying Mississippi snakes using the rules of thumb –

But that doesn’t mean that you should necessarily play with any round-eye, round head snake you see.  Even if a snake is known to be non-venomous, it is best to avoid being bitten because non-venomous snakes can still carry dangerous bacteria that can cause a horrific infection.

And it doesn’t mean you should attempt to kill any venomous snake you see.  They play a role in their ecosystem and some are even becoming endangered because people chop any rattler they hear with a hoe.  Also, most venomous snakebites happen when people are trying to kill a snake.

So, it is nice to know if a snake is dangerous or not, but it is best to leave any snake alone unless it poses an imminent threat to you or your kids.