When is this infernal Mississippi summer going to relent and give us a break!?  Usually we can look forward to a little bit of relief from the summer heat by around September and we can expect a first frost sometime around the end of October to mid-November.

But this year everything has been early, and I wouldn’t be surprised if we got a little bit of autumnal weather early too!  In the past few weeks I’ve seen three surefire signs that Fall is on its way!

Love bugs are a plague in the southeastern U.S. from Florida all the way around the Gulf to Texas.  These vile flying pests are semi-annual, appearing in Mississippi in May and then again in September – except this year we’ve see our first clouds of love bugs this week – 2-3 weeks early!

Also known as spider lilies, these relatives of Amaryllis are many people’s first reliable sign of Autumn.  They are called naked ladies because the green stems grow tall, plain, and invisible in tall grass until they burst into bloom just before the weather changes.  The sudden blooming of previously invisible stalks gives them their other name – surprise lilies.

Regardless of what you call these beauties, they are a harbinger of autumn, and just like the love bugs, this week someone reported to me that they have a crop of naked ladies in bloom in their ditch! 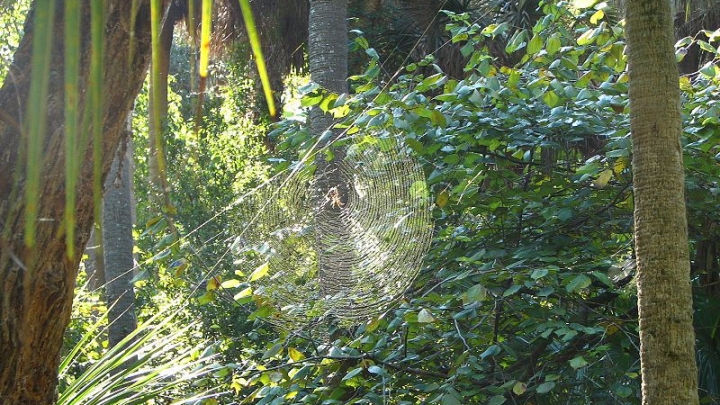 Also known as golden orb weavers, these guys are  a creepy indicator of oncoming cool weather.  In the late summer or early Fall, hikers begin blundering through their characteristic golden-colored webs. About 2 weeks ago the Roaming Parkers did a day-hike at Percy Quin State Park and we could barely get the remnants of one web scraped off our faces before we stumbled into another one!  I even had one giant orb weaver hitch a ride on my hat for a while!

So, if we get some early relief from the blistering heat pretty soon, you can say you heard it here first.  But then again, if we suffer under oppressive heat until December, I’m sure it was global warming or El Nino or something that upset my otherwise surefire signs of Autumn!